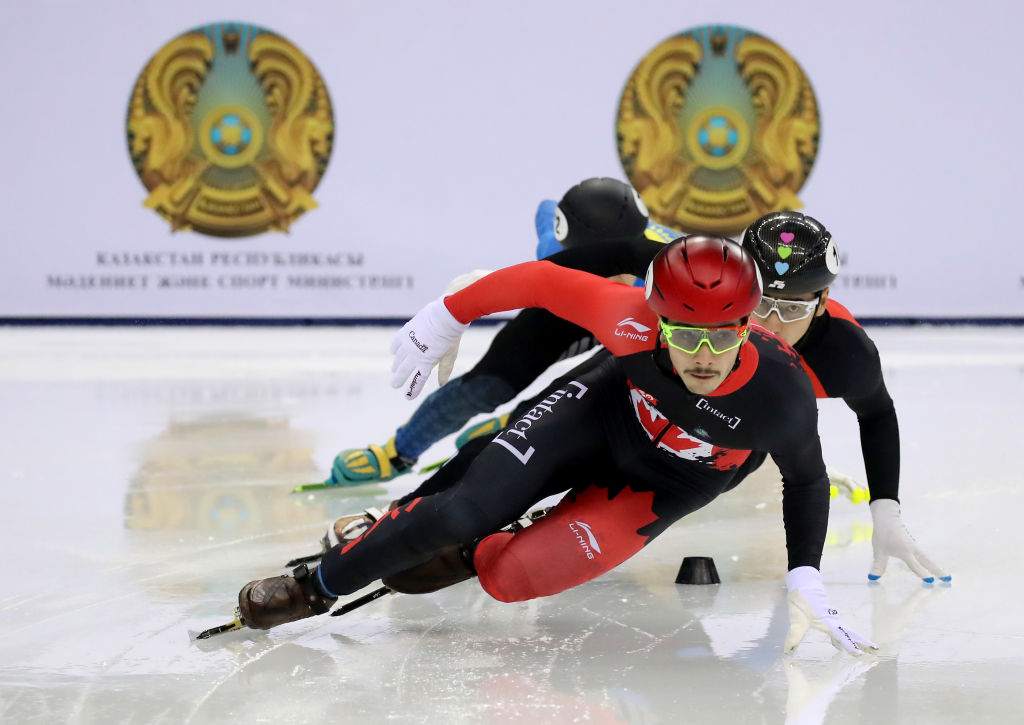 As Suzanne Schulting (NED) continued her medal haul in Almaty, Kazakhstan on Sunday, securing the lead in the over the overall world ranking, Petra Jaszapati's (HUN) first individual World Cup victory was more of an upset. The 500m gold was perhaps most surprising for the 19-year-old herself.

“It was my first (individual) A final of the season and I did pretty good yesterday in the (1500m) B also, so I wanted to just enjoy it and it happened and it was really good,” she said.

“I want to train even harder to have this feeling more often.”

Tired from months of hard training and feeling far from a medal candidate, Jaszapati had not even brought the hoodie that she needed to wear at medal ceremonies.

“I left it in the hotel because I was like, ‘Meh, let’s see what will happen today’ but didn’t expect a medal at all,” she said.

“My hoodie looks so big on the pictures because I had to borrow one from Shaolin (Liu Shaolin, HUN) so it was like a pyjama on me.”

Rather than becoming a reminder to always bring suitable clothes for medal ceremonies, Jaszapati joked that she might never bring her hoodie to competitions again.

“Maybe that was my lucky charm,” she said.

She led the final from start to finish, crossing the line more than seven seconds clear of Lara van Ruijven (NED) after the Dutch silver medallist, Natalia Maliszewska (POL) and Sofia Prosvirnova (RUS) crashed in the last lap, disqualifying the Russian.

The event’s World Cup leader Maliszewska had no problems settling for third place, having secured two 500m victories at the previous World Cup weekends, in Calgary – where two 500m events were held – and Salt Lake City.

“This is Short Track and I know things can happen like today,” she said.

“I’m happy with my bronze and I’m happy with the girls, we were laughing and smiling and we were happy. This is my journey that starts and I’m happy to be in a final again because we’ve had four finals in 500m this season and I’ve been in all of them.”

The 23-year-old said she could hardly feel her legs, exhausted after having to repeat her 500m semifinal because of a crash and having qualified for her first-ever 1000m final the previous day.

“I’m fresh and not as good of an athlete yet, so I need to get used to things like this. Being in the final is also a big thing for me and I’m trying to do my best and trying new things but this is Short Track and you can’t decide the future,” she said.

“I’m happy that I have the chance to be in the top and be marked in yellow on the start list (as the World Cup leader). It’s an amazing feeling but I think that races like this will make me feel and be a better skater because this is how everyone’s journey starts. I will be consistent soon, in the future, but for now it’s a process.”

In the weekend’s second Ladies’ 1500m final, the top duo was more expectedly the two overall World Cup leaders Choi Min Jeong (KOR) and Suzanne Schulting, who battled it out in the last two laps, Choi finishing first in 2:28.264, 56 thousands of a second clear of Schulting.

The Dutchwoman was going to get her revenge in the Ladies’ 3000m Relay, where this season’s two outstanding skaters faced each other in a gold-medal sprint. As Schulting passed Choi in the last meters of the race, the Korean fell and had to be taken to hospital.

After celebrating a successful Almaty campaign with her teammates, Schulting honored her rival Choi, hoping for more hard battles with her this season.

“I was a little emotional because I felt really bad for her but hopefully she is fine,” Schulting said.

“She is an absolutely great racer and it’s great to race against her, so it makes it even more special to beat her.”

Kim Boutin (CAN) finished behind the two rivals in the 1500m (2) and led her Canadian team of Danae Blais, Alyson Charlesand Camille de Serres-Rainville to a bronze in the Relay. She Boutin won gold in the 2000m Mixed Relay final together with Charles, Blais and Samuel Girard (CAN).

Girard (CAN) back with a bang in Almaty

When Samuel Girard (CAN) returned to the podium for the first time this season, he did so with a bang, winning two gold medals and a silver on the final day of action at the ISU World Cup Short Track in Almaty, Kazakhstan.

The PyeongChang 2018 1000m gold medalist led the 500m final from start to finish and got his fourth World Cup victory over the distance 14 hundredths of a second clear of Overall world ranking No.1 Shaoang Liu (HUN). Home favorite Abzal Azhgaliyev (KAZ) won bronze.

“The first two World Cups were a bit harder but we’ve trained really hard for the past two weeks to be ready for this one and everything was set to win here,” Girard said.

“I’m pretty fast on the start, that gives me a good advantage, and I think that this weekend I was a little more patient so I was reading the race better, trying to find a good moment to pass.”

Less than an hour later, Girard sprinted past Lee June Seo (KOR) in the final meters of the 2000m Mixed  Relay, winning gold with Cedrik Blais (CAN), Alyson Charles (CAN) and Kim Boutin (CAN) ahead of Republic of Korea after a photo finish. China won bronze.

“It was really exciting,” Girard said.

“I knew that I had a gap and I wanted to catch up on him and I didn’t know when I would catch him, but I saw the opportunity and thought, ‘Let's just go, let’s do this’ so I felt the instinct, I went for it and it was a gold medal.”

Shortly after, the 22-year-old was back on the ice with Pascal Dion (CAN), Steven Dubois (CAN) and Charles Hamelin (CAN), and winning silver in the Men’s 5000m Relay behind the Netherlands.

“Personally I’m really happy to be back really strong on the track. I did some great moves on the ice, I feel strong and it is really nice to have a result and be back on the podium, Girard said after finishing ahead of bronze medalists China. “I am really excited for the next World Cup (in Dresden, 1-3 February).”

“We are leaving tonight so I’m going to sleep well on the plane.”

Canada and Republic of Korea had taken turns to be in the front for most of the 45 laps but Canada missed the chance of a gold medal after veteran Hamelin, 34, fell with seven laps to go.

Instead, Netherlands took up the chase. After two strong finishing laps, Sjinkie Knegt (NED) caught up with Lim Hyo Jun (KOR) in the closing stretch but did not manage to get around Lim – this year’s Olympic 1500m champion. However, the Korean was penalized for blocking his rival’s way and Netherlands were awarded the gold medal.

“This team did a good ending of the race,” Knegt said. “We speeded it up, we closed the gap, Lim slipped a little and then he tried everything to block me.”

The weekend’s biggest cheers in Halyk Arena were for  Abzal Azhgaliyev, who, after claiming 500m bronze, was swarmed by fans and volunteers wanting a photo or autograph from the host nation’s only medalist at Almaty’s inaugural World Cup event.

“It felt great. I’m proud of my country and I’m really happy and I think that many fans in Kazakhstan also are very happy to get the first medal in this competition,” said Azhgaliyev, who finished fifth in the 1000m final on Saturday.

“I’m a little tired from having raced five 1000m races yesterday so today it was tough in the beginning but from the semifinal and the final it got easier because so many people supported me. After finishing, a lot of people were happy and made a lot of noise.”